I woke up very early on last day, maybe because I was too excited anticipating for last day in Da Nang. I wanted to see the big statue of Lady Buddha. It looks impressive on google images. Another thing that interesting was Marble Mountain. With those thoughts I woke up at 5.30 am! But what is this, raining hard early in the morning 😦 “Maybe only for a short time, we still have time until 9.30 am for the rain to stop before we go on tour”. That was what I was thinking.

Sometime reality is more cruel than wishes. It was 9.30 am and still raining hard, even very windy. We had black out several time already since morning. When I went to reception desk to check out, I had a conversation with the staff. She said the storm is coming! Usually it lasts for 2 days, and happened during Mid September until December. This is a very important information. The best time to see Da Nang is on summer time.

The tour guide arrived on scheduled time but we couldn’t leave yet. I asked her about the plan for the day and she said no change, we still can go. After waiting for the weather to get better and didn’t seem to get any good progress, we left the hotel at 10.00 pm. We were heading to marble mountain. Somewhere on the way tye driver asked permission to pick up her son because the school called him regarding the storm. No school for that day and until the storm gone. I also saw many stores were closed on the way. Not a good thing to start last day of trip. Especially when we started to worry about our flight, will we be able to go back to Ho Chi Minh City. I didn’t worry about it. For me it’s better to stay in Da Nang than flying back with unsafe condition with the storm. 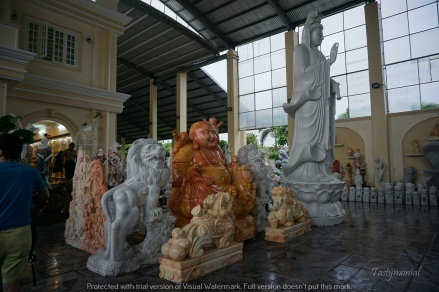 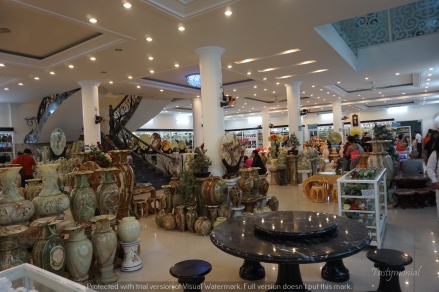 Before we went to marble mountain, we visitted marble factory store. It was to buy time and wait for the rain gone. I don’t mind to stop at store at all. Shopping time  😀 This store sells many products from marble and other stone. They have a good product and design. The price also negotiable. They put price tag on it but we can bargain still. We spent quite some time there and bought sonething as well. They packed it nicely so we can carry them easily.

The shopping done but the rain still pouring hard. No marble mountain because it became too dangerous. That also meant no trip to Son Tra Peninsula to see big lady Buddha 😦 Next time… I will see it next time..

With that kind of weather we decided to see indoor attraction only, and the only option was Champ Musseum. The problem was it’s gonna take sometime to go there and look around, and it was almost lunch time. Too many hungry people in musseum wouldn’t good. Let’s get some lunch first before musseum.

We went for lunch at Angelo. The food was good. This tour is good, she can pick all the local dishes on every meal and all of them are different, while still on budget. My favorite here is the vermicelli and beef salad. That glass noodle didn’t look appealing at first,but it tasted sooo good. I think I was the one who ate most of it. Other people didn’t take as many as I did *blush*. The steamed calamary also good! It was very tender and tasty. I only ate one because I need to control my cholesterol level 😦 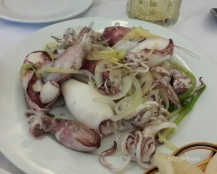 After lunch we went to Champ Musseum, while hoping it will be open. It was open, but the guard didn’t allow us to enter because of the storm. Later we found out there was water inside the musseum, and that musseum can’t hold many guests, especially ‘wet’ guests. Their collections are prone to water.

Someone needed to buy local snacks from the supermarket, so we stopped by at lotte mart there. Luckily they were still opened. The lottemart is big and nice. On first floor there are shops, hair salon, souvenir shop. The second floor has fashion, cosmetics, bags, and book store. The thirsd floor is their supermarket. I didn’t go inside, only my friend did. On forth floor, there are bowling alley and arcade game center. After my friend done with shopping, we went to bowling alley.

The bowling area is rather big. One game only costs 35.000 vnd per person. We all wore shoes with socks so we didn’t borrow socks, only the shoes. The condition of their shoes were really…saddening, but we had no choice. We played there for 1 game only but soo much fun. Afterbowling, we went to see the arcade game center. My friend saw a dance machine and wanted to try it out, so she dragged me to the game (although I would join her voluntarily xD). It was really fun!

After playing around there, we decided to go back to hotel and wait there. The main reason was nothing to see anymore and the city looked like a dead city, everything closed. We arrived at hotel around 4.00 pm, and waitted there until 7.30 pm.  The tour guide was really helpful during that time. She helped us arrange a place to rest, which was the foot massage room. Also she arranged shower for us so that we could take shower at spa place, for free. We wanted to have spa as well but it was fully booked. Because of the storm many people had spa. So we just took shower then waited again in the lobby until the time we need to leave to airport.

At 7.30 pm, the driver and tour guide had come again to pick us up at hotel. We went straight to airport. Actually I received a notification via sms from Vietnam Airline about our flight. It was postponed until 10.30 pm. We still left for airport on original time, 7.30 pm. One of the reason was the driver need to pick up another tour group at 8.00 pm.

On the way to airport, my friend said what if there is no food anymore at the airport, since many flight was delayed. There might be no more food at airport. To ease our worry, we stopped by at KFC! I didn’t go with them, waiting in the car. It took a very long time for them to just buy fried chicken. Apparently KFC didn’t have fried chicken anymore. All sold out so they need to wait for 30 mins for new batch. We couldn’t afford that so we bought everything available at that time. Grilled chicken, chicken burger, french fries, anything they can provide fast.

When we arrived at the airport, it was full with people. We were lucky we could checked in through an empty lane. After that we looked for a place to eat, since we couldn’t bring food and drink through security check.

After we done eating, we walked pass the security gate and went to our gate. On the way we saw burger king and 1 other restaurant on gate area! We didn’t have to buy food outside. At least now we know 😐

We looked for empty seats. Just anywhere because the waiting room was really full! Too many people got delayed at the airport. We managed to find seats for us. The waiting game started…

I got from Vietnam Airline about flight delay before so we waited for 10.30 pm. There was an announcement about our flight. The flight delayed to 11.25 pm. Ok… We waited again. We already waited for more than an hour anyway, no big deal. Then there was another announcement about our flight. It was delayed to 11.55 pm due to weather condition (still). I really didn’t mind. I prefered to stay safe than forcing to fly in bad weather. And it was last announcement for our flight, we finally could boarded the plane. It was very frustrating when we were walking to our gate. There were many people and they mostly didn’t queue. There was someone behind me trying to cut the line. I didn’t let him do it! I stayed on his way so he couldn’t passed by. Ha!

The delay didn’t annoy me. There were 2 things that annoyed me. First one was the queue in toilet. It was really messy. So many people wanted to go in and they didn’t queue in 1 line. They are used to queue in front of each toilet door, so it was pretty messy. There was someone with a little girl near toilet’s entrance, and she asked the girl to urinate on the floor! The second thing that annoyed me was the queue to board the plane. They are really need to learn to be patient and queue in line, and not cut in the line. With many tourists coming there, i think soon they will be better on these things. I still hope so.

I fell asleep as soon as the plane took off and woke up just before we landed. It was really tiring, but I was so glad and thankful that we landed safely. So.. That end my journey to Da Nang. It was a very memorable trip. I like the city and I definitely come back next time.

I enjoy good food to the extend that I will smile when it is so good! For me, a good food can make me feel better. That is why i made this blog to share good food with people. So that i can help them to feel better as well! View all posts by Mels