It was my birthday trip and I never been to Nha Trang before. Excited to see how it looks like! We took flight with VietJet in the morning, and was delayed for almost an hour! My husband booked a car from the hotel to make it easier. But actually you can take taxi to the city as well. There are Mailinh and Vinasun in Nha Trang. The trip from the airport to our hotel took about 40 minutes. Yes, it was far!

We stayed at Alana Beach Hotel because the location is good and their price is reasonable. One of the reasons for their low price is the new construction building next to them which block the view to the sea! From our room, we could see sea about half of the window. Not bad, but would be better without that building though! The most damage made by that new construction is in the bathroom. There is a big window next to bathtub intended for guests to enjoy the sea view while taking a dip. Now it is blocked by the construction, and of course we need to close the curtain. Unless you don’t mind being watched by the workers lol. 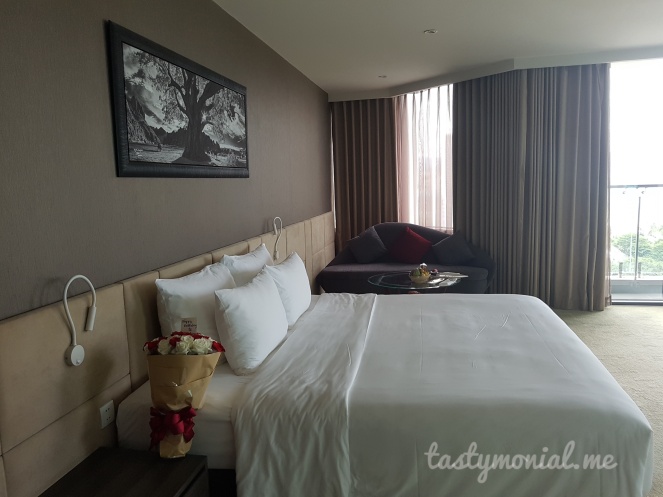 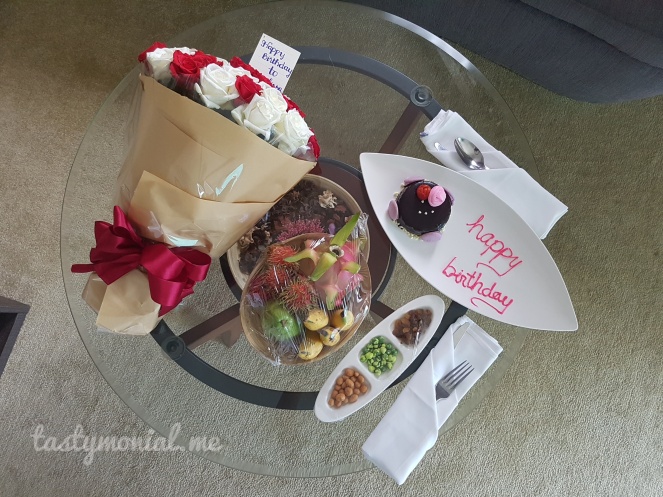 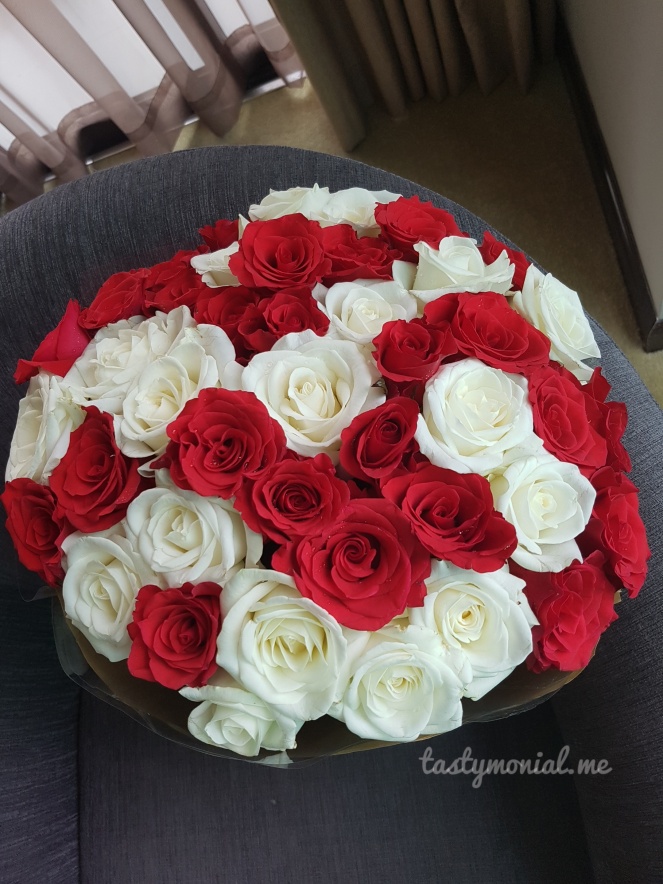 The hotel provided a flower bouquet and a small cake for my birthday! I’m sure it was a request from my husband though for the flowers because the color was red and white. Just like our flag color. My birthday is the same as Indonesian Independence Day. Hence the color of the bouquet. The upsetting part was when I realized that I couldn’t bring the bouquet home 😦

It was past lunch time when we arrived at the hotel. We ate the cake to fill up our tummy before going out to find a place to have lunch. My husband reminded me about nem nuong which I love in Saigon. He said new nuong in Nha Trang is different. More authentic and taste so much better. He found a place called Nem Nuong Ninh Hoa, not far from our hotel. About 13 minutes of walking. Off we go to that place!

The place was very empty when we arrived. It was past 1.30am so no wonder no one was eating there. I just want the nem nuong. My husband ordered beef as well. They served the food quite fast. Nem Nuong consists of crispy fried rice paper (which I like so much) and grilled pork. They came with vegetables and dry rice paper. We need to make the roll our self by putting everything we want on the rice paper and rolled it. Can add the sauce as well. 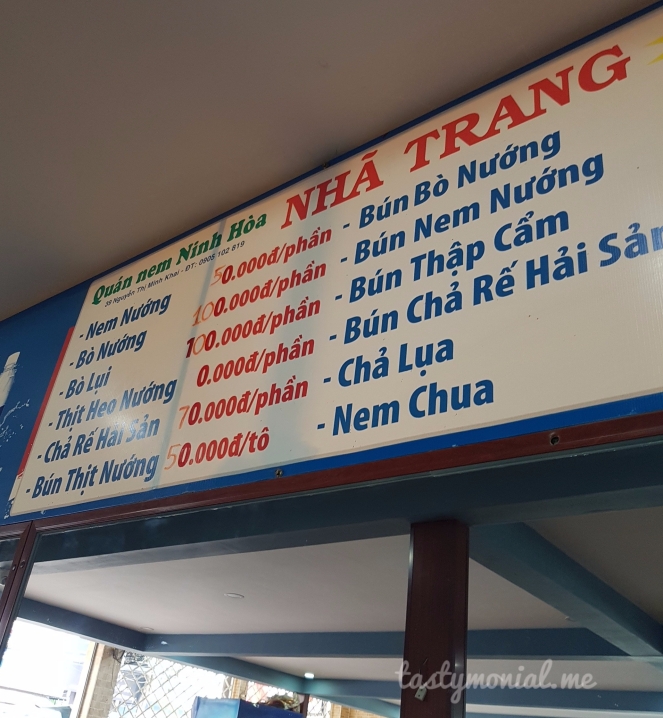 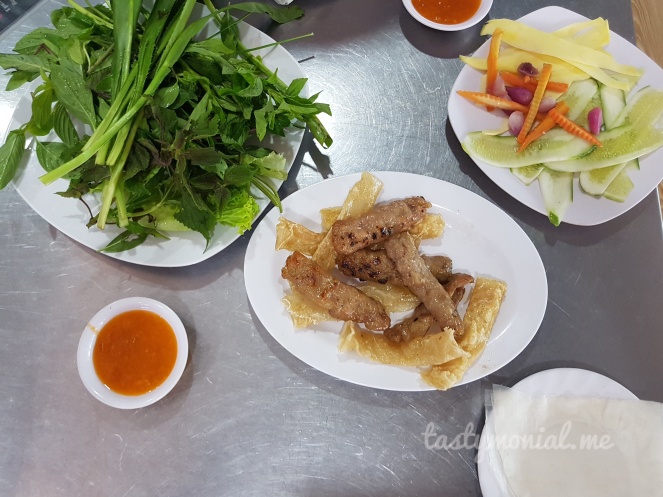 First bite and I was in heaven! It was so good. The combination of vegetable, pork, crispy rice paper, cucumber and mango were really nice. I loved it! Totally recommended this place for lunch or dinner. They have another branch on the same street just a bit further away.

After lunch, we walked to Sinh Tour which is close by as well. I wanted to ask about private tour with them. When my friend came to Vietnam last time, they went to Mui Ne and they used Sinh Tour’s private tour and it wasn’t expensive, so I wanted to try it in Nha Trang as well. For private tour, the minimum is 4 people. Since there were only 2 of us, the price was too expensive. The guy then offered us to rent a car, which would cost about 700k vnd for 4 – 5 hours. Still a bit too much for us. We also asked about Island Tour. And in the end, we didn’t use their tour service.

I haven’t made any itinerary for this trip, so everything was decided on the spot. For next destination, my husband suggested Long Thanh Photo Gallery. On google map, Long Thanh Gallery is located near Nha Trang Cathedral and Long Son Pagoda. Both about 10 minutes walk from the gallery. So first we go to Long Thanh Photo Gallery by taking a taxi, and it cost us 31k vnd which is not bad.

At the door, there is a sign “Please press the bell”. I pressed the bell and waited until someone showed up to open the door. It was a lady who opened the door. Followed by a guy which is the photographer, Mr. Long Thanh. It is a small gallery but filled with many beautiful photographs. All in black and white style. We strolled around the gallery and found some interesting photo to buy, but the problem is we didn’t know the price.

I started a conversation then with the photographer. He is very friendly and helpful as well. He gave me the price list and explained about his work. All of those photographs were taken with an analog camera in black and white film. So it is different than the one taken with a digital camera in monochrome style (Yes, he is very proud of his work. I would too! if I were him). He developed and printed it himself. He also told me that he likes to collect cameras. There are about 45 cameras that he owns now. That’s a massive number! I asked him why didn’t he exhibit his camera to the customer, like in a museum. He explained that he doesn’t have a proper storage to store his camera downstairs, and it is hard to maintain it. Now he put all camera in his working room inside special boxes that will protect the cameras. Make sense. Truly a photographer who loves his camera.

It is not allowed to take picture in his gallery, so I asked him to take photo with me instead after he packed up my purchases. If you are visiting Nha Trang and love photography, make sure to stop by at this gallery. He gave me discount as well for my purchase! And you can pay with credit card, not necessarily pay in cash. The photos are packed in a sturdy tube (We put it in our luggage and it is still good when we arrived back in Saigon). 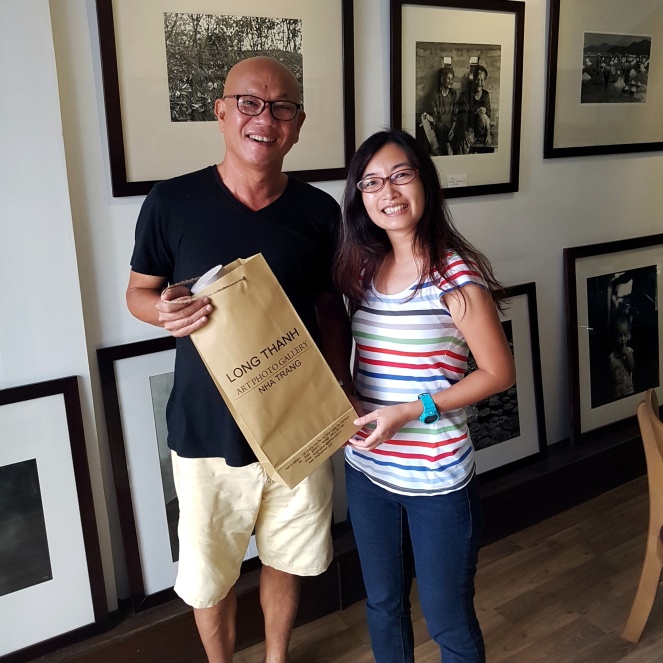 After saying goodbye to Mr. Long Thanh, we continued walking to Long Son Pagoda. It took about 10 minutes of walking to reach it. This pagoda is huge and there is a certain area (the main hall) that you can’t go in if you don’t wear appropriate clothes, but you still be able to explore another area. My purpose here was to see the big Buddha statue! We climbed up the stairs and found something on the left area. Sleeping Buddha statue!! It is so majestic and nicely made. After taking some photos, we continue our journey to the top. Bring a bottle of water with you if you do this. Or you can always buy a drink there. There is small shop which sells drinks and coconut.

From the top area, we could see the city as well. The other part of the city though, that is full of buildings. The Giant Buddha statue reminded me of the one in Lan Tau Island, Hong Kong. But this one slightly smaller. Took some pictures and off going down back to the entrance. After the climbing, I felt very exhausted (getting old??) so we decided to go back to hotel first to rest. At the entrance, we took taxi from another company (not Mailinh nor Vinasun) and already prepared for getting scam with the fare. The trip from Long Son Pagoda to our hotel is about 12 minutes of driving, and it cost 61k vnd. My husband thought this is too much but maybe not really. Need to compare more. 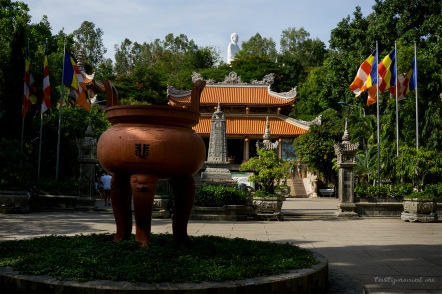 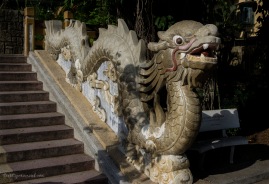 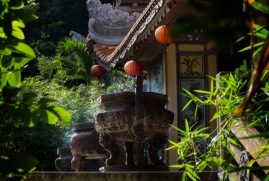 After resting for a while, it was time for dinner. I wanted to eat seafood since we were in beach city. My husband found a place in Nguyen Thi Minh Khai street number 79. In the afternoon we passed by a place in that street that looked interesting. We checked them out to see if it’s the same place. Apparently not. This first place (I forgot the name) has smaller number than 79. And while we were waiting to be served, my husband checked on their review. It was 4.5 out of 10! Time to keep moving.

We walked to the other direction for bigger number, and tried to find number 79. It was a long walk and all we could see was number 75! There are so many building with number 75 (even inside a small street, still have number 75). When finally we arrived at number 79, we were disappointed because the place has changed. It is not a seafood restaurant anymore but selling Vietnamese noodle instead 😦 We also visited a restaurant with 79 on its name just in case, but they also don’t sell seafood.

With hungry stomach and tired legs, we decided to try Lee’s Grill. It has a good review as well. The place is clean and comfy but their menu is very minimal. I couldn’t find any interesting dish to order! (Well there was a spicy Korean noodle with seafood on the menu, for 70k vnd, but nope!!). My husband ordered assorted seafood skewers to share, and a Korean style clam soup. Then we got a portion of salad and garlic bread for free! 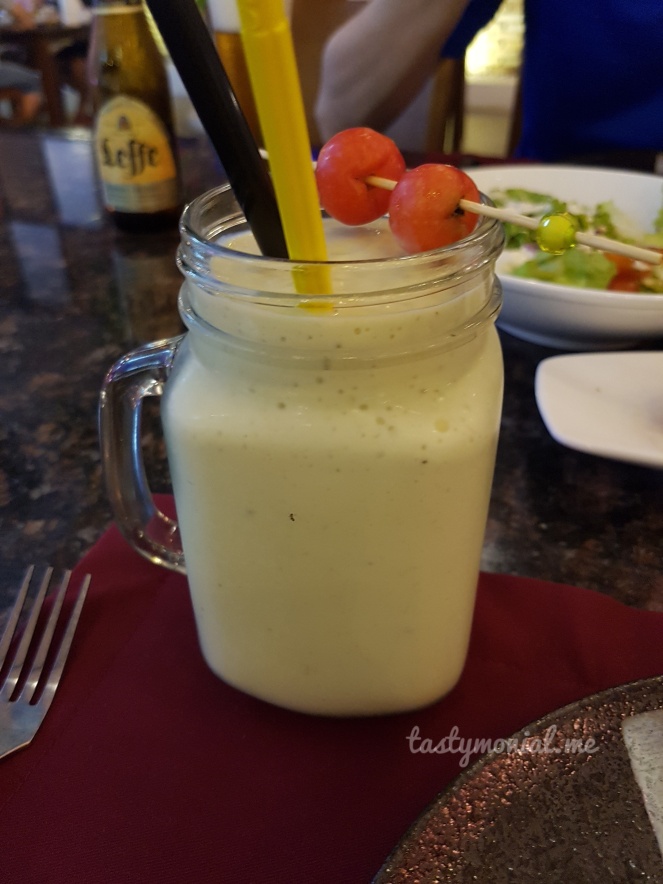 The skewers were pretty good. My favorites were grilled baby octopus and bacon with cherry tomato. Baby Octopus was not hard to chew and it tasted yummy as well. Marinated well. Bacon is bacon. Never wrong.

After dinner, we walked back to hotel but made a stop at T-shirt shop, named Ginkgo. Their t-shirt has a unique design and good material. They are using organic cotton. The price is a bit high though. Average prices are 310k vnd for a man t-shirt and 400k vnd for ladies t-shirt.

Continued our journey to the hotel afterward. Around 9 pm, we went to Sailing Club. It is a famous club in Nha Trang. Entrance fee was 150k vnd and we got a ticket for drink. We had to choose which drink we want, was it beer or a cocktail (vodka mixed with orange juice). I chose cocktail of course for that price!

When the drink came, I just remembered that I don’t like vodka! Silly me. Fortunately, this cocktail was acceptable. The portion also quite big for a cocktail. We also ordered chicken wings because we suddenly felt hungry. It was very yummy! The sauce on the wings were delicious and it tasted like they were using worcestershire sauce. Must try! Then dip it in cheese sace if you fancy. But even without it, already finger-licking good! 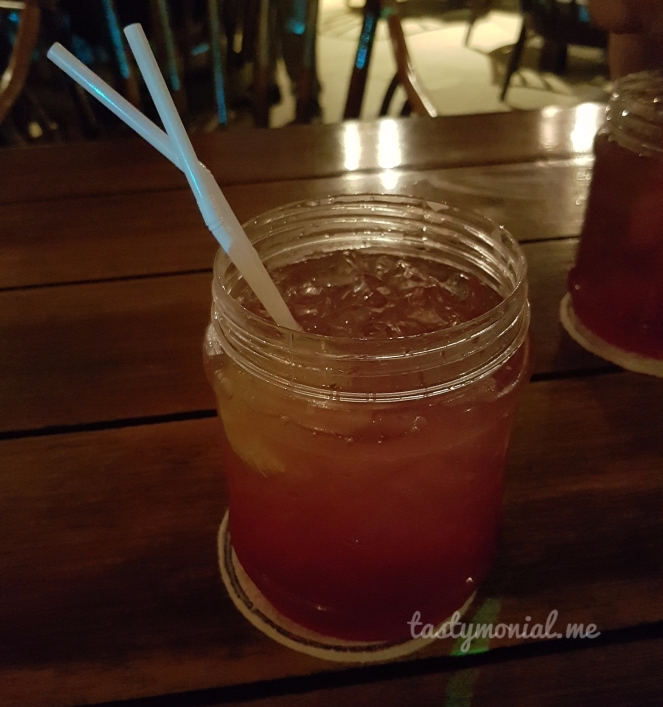 The Sailing Club that night was full, but not many people were dancing on the floor. Music was cool and updated. MC was trying so hard to ask people to join her dancing. There were some people smoking but I didn’t mind it because it was an open-air. What I hate about pub in Asia is they smoke in the room!

After enjoying the music and atmosphere for a while, we went back to hotel and rest for the day.

I enjoy good food to the extend that I will smile when it is so good! For me, a good food can make me feel better. That is why i made this blog to share good food with people. So that i can help them to feel better as well! View all posts by Mels