Lately, there are many new restaurants coming to Thao Dien area, mainly in Xuan Thuy street. But none of them bring the concept of American diner despite of many American living here. Last weekend, it appeared! Eddie’s – New York Diner was having their soft opening. Discount 20% during this period (while they have their staff trained more).

I was invited to go there last Sunday. It was late afternoon and an awkward time to have a meal, so we ordered Cinnamon Roll for share and a homemade soda for me. 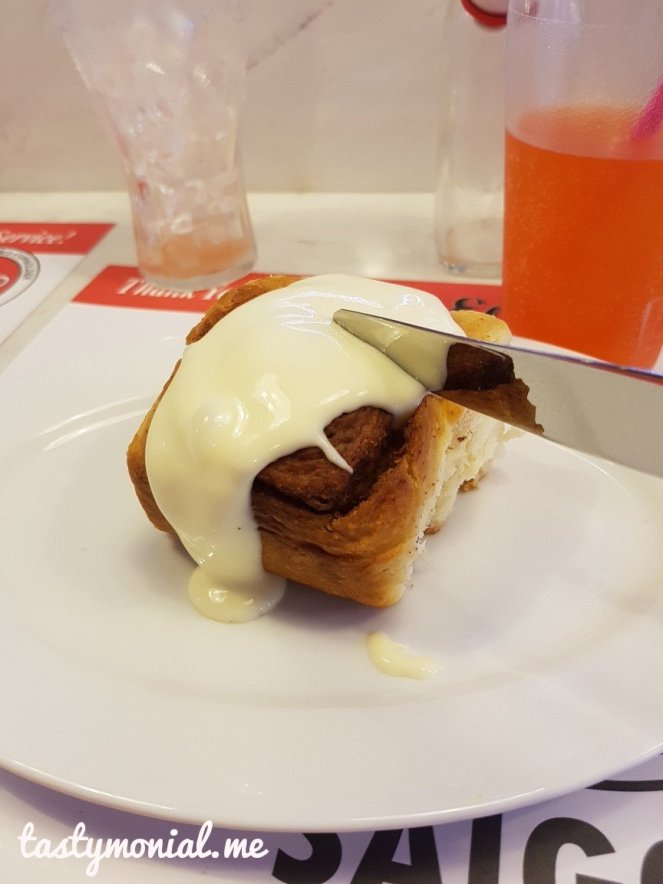 I love the smell of cinnamon even though I’m not a big fan of bread. This cinnamon roll was delicious! It was not as sweet as normal cinnamon roll, but I think that is the plus point with many people avoiding sweet stuff nowadays. Overall it was great. I just thought maybe if they could heat it up a bit before serving that would be even better. A warm cinnamon roll, yum!

The homemade soda was also great. I had to move it to empty glass though because the taste was too light with a lot of ice cubes on the glass. It was better after that. I can taste the ginger and orange in it, and was still cold even without ice.

We were looking at the menu and my friend was explaining the names on the menu. Some of them I never heard of since I’ve never been to US nor American diner. Most of the food are meat. There are some salads menu as well. When we reached side dish section, I saw onion rings and I ask her if it’s possible to order it without main dish. We can!

I was so happy when it arrived. Onion rings is one of my favorite snack (although sometime I got sick after eating too many). This onion rings were awesome. The texture of the onion was perfect. The crispy batter was great. The only thing I would recommend is to sprinkle some salt on top of it before eating it. Pour some ketchup, dip the onion rings, and enjoy the crunchy batter and soft onion inside.

Next time I will try their main dish! Have you visited them? What is your favorite american diner dish? Tell me in comment below.

B-Dubs is one of the sports bars that is located at Thao Dien street. I’ve always wanted to try their chicken wings because I heard they are really good. Today is finally the day! I went there with my friends, unplanned.

I ordered chicken wings snack portion (5 pcs) but I didn’t know which flavour should I get. They have A LOT of many flavours from sauce-based to dry one, from mild to very spicy. I didn’t want spicy chicken wings, that’s for sure. So I asked the waitress her recommendation. She suggested Buffalo from the dry version. I ordered that.

It came with veggies and an option of blue cheese dip or ranch dressing. I chose blue cheese. After a while, they came out. I couldn’t wait to dig in, so I did.

It was a right decision! It was salty chicken wings and a little bit spicy. I’m not a fan of sweet food. The meat was tender and it’s just made me want more and more! Dangerous…

I will come back and try their other flavour, for sure!

Pizza 4P’s has two new pasta menu using cheese. One is Blue Cheese Fettucine (which they claimed to has not-too-strong smell) and the other one is Raclette Cheese Pasta with Parma Ham. I’m interested in the latter because I love raclette cheese!

These new homemade pastas are not listed on their menu yet. So I had to asked the waiter for its availability. Luckily, that day it was available!

It was awesome! I loved the cheese taste on al-dente pasta. It reminded me of their cheese and pepper pasta (which is not available anymore), but that one was using pecorino cheese. This is one of my favorite pasta now at Pizza 4P’s!