How far would you go to try on new food? Luckily for me, it is easy to travel around Singapore due to their amazing public transport. So, this time I went to Hillview area, which is located in Bukit Batok. I was invited by my friend on her birthday to have dinner there. When she told me about this restaurant, I was excited and couldn’t wait to try it. They only make meal sets, which are different every day! Of course, there are some side dishes that are almost every day included in the set menu. The food they are served is Korean home-cooking style.

The restaurant is located in Hillview Community Club on the 1st floor. When we came, there was only 1 table left and the uncle let us sit there. After we sat, we saw a queue outside. How lucky! I only saw three people managing that restaurant. The couple, who are in charge of the dining hall, and 1 lady as a cook. That day they also have a special set with beef ribs soup, so the uncle asked us which set menu we wanted. We told him we wanted the normal set for 2 pax. The food took quite some time to prepare, but it was all worth it!

We can check the menu on their Instagram account @wangfamilykitchen. They posted every day what was on the set. We went there on June 16th, and their menu set consisted of Gimbap (Korean rolls), Yangnyeom-chicken (Seasoned Fried Chicken), Jjolmyeon (Spicy, chewy, sweet and sour cold noodles), Grilled Saba Fish (Grilled Mackerel), Miyeok Julgi Bokkeun (Stir-fried seaweed stem), Homemade Mashed Potato Korean Style, Gyeranmari (Rolled omelet), Kimchi, White Rice, plus Soup of the day which was Soybean Sprouts Soup. Don’t worry, they all came in a small portion. But yes, it IS still A LOT lol.

Of all these, I managed to finish Gimbap (Korean rolls), Yangnyeom-chicken (Seasoned Fried Chicken), Grilled Saba Fish (Grilled Mackerel), Miyeok Julgi Bokkeun (Stir-fried seaweed stem), Homemade Mashed Potato Korean Style, and White Rice. They were all delicious and I really enjoyed them. It can be considered as comfort food for me. Their Jjolmyeon (Spicy, chewy, sweet and sour cold noodles) actually was yummy as well but it was too spicy for me, unfortunately, so I couldn’t finish it. Well, the other reason was that I need to spare space for their dessert. Their kimchi

I am not a fan of omelets, and I also thought that their Gyeranmari (Rolled omelet) was too dry and not fluffy enough for my taste. Their Kimchi is also not that great in my opinion. It lacks spicy, sour, and salty taste, so it is rather bland. The Soybean Sprouts Soup was okay, actually, I almost finished it.

After we finished our meal, it was time to wait for the dessert. According to my friend, their desserts are always watermelon and a waffle. I wondered why no ice cream on the waffle, and I found out the answer when it came! I tried the waffle first and O.M.G.. it was sooo good! The outer was crispy, and when I bite it has a chewy texture. The sweetness was also on spot, just as I like it. The waffle was still warm as well! Meaning it was fresh from the kitchen. I was so happy after chomping it all. Happy tummy! And all that for only $17.90 nett. No service charge, No GST. Wow.

I definitely will come back again next time! And maybe will also try the coffee shop next to it. I heard they sell good coffees.

This could be a nice combination if only the soba noodle was not too soggy. I don’t know if it is the way they cooked it or just a one-time overcooked noodle. Other than that, everything else was tasty. A nice option of healthy food to be delivered to our home by @grabfoodsg.

I’ve seen this noodle place at Upper Thomson shophouses area and been wanting to try it out but was not sure if they’re good (I didn’t check any review as well lol). But looking at their pic, the noodle seems very appealing to me. After I heard it from my friends, I decided to try it.. And WOW! I Love it!

The texture is springy, the original sauce is great AND every single topping is yummy.The wontons, chasiu, fish sausages, even the fried lard are also yummy (too bad they are very little though..).

This noodle has become my favorite noodle in Singapore now! If you haven’t tried it, you should!

I’ve been interested in terrarium since years ago actually but never really encouraged myself to learn about it. Taking care of succulent has been my interest recently. Although, I don’t know yet how to really take care of it.. (I’ve killed 3 succulents! 😦 ). Frustrated with succulent, I’m thinking of learning about terrarium instead. Not sure if it’s a good idea though haha.

I searched online about terrarium workshop and everything seems so expensive.. But then I tried to search on fave and found several terrarium workshop. I chose J2 Terrarium after googling about them and seems legit. So I bought the voucher on fave for S$22 for 1 person. On the app, it said I need to do the booking via message. Apparently, they are on whatsapp with the same number so that makes it easier to book an appointment.

J2 Terrarium is located in Yishun area inside the A’Posh Bizhub building (1 Yishun Industrial Street 1, #04-06, Singapore 768160). From the lift lobby, just look for number 06. It’s quite easy to find. When I arrived, there were some other people as well so I guess this workshop must be good then (or at least, considered cheap?!).

The voucher from fave is valid for the small jars. There are 2 options for it. And if you decided to choose another jar, you just need to top up the difference. At first I was lazy to top up and just used the small jar, but after looking at other people’s jar I decided to opt for the dome model.

After I picked my jar, she showed me the place where I can sit. Most of the participants came with their partner or friends. On the table, there were tools, gravels, colorful sands, soil, sphagnum moss and stones. So excited to learn about this!

The first thing to put on the jar is gravels. I put the colorful gravel on the bottom and covered all of it. The gravel is used to contain excess water if any, so the soil won’t stay wet for too long because that can cause the root to rot.

Next is sphagnum moss, I put it on the gravel and pressed it especially around the glass because on top it we will put soil and we don’t want the soil to fall to bottom part. That’s why they used sphagnum moss to separate the gravel and soil. This is the important part.

On top of it, we put soil. No need to pressed it just pour it loosely until about 1 cm. We can put colorful sands as decoration (optional). If we want to use colorful sands, then it doesn’t need to pour on the whole surface with it, just put them on the edge where we can see it behind the glass while the middle part we can put soil instead. Noone will see what’s inside it anyway 😀

Next, we put soil. Lots of soil but not too much. We need to give space for the plants as well. For the dome jar like mine, I need to stop pouring soil about 1 cm from the jar edge because on top of soil we will put small gravels as decoration and we don’t want it to reach the edge.

After we’re done with soil, then it’s time to pick the plants! For closed terrarium, we will use fittonia and holland moss. And for open terrarium, they will use succulents and preserved moss (not live moss and comes in different colors). Jason then explained to us on how to take the plants from their pot and place it in terrarium soil. Since I was making closed terrarium, I picked my fittonias! It can fit 3 plants in my jar so I chose 3 different colors of fittonia 😆

We are allowed to pick 1 figurine for free to put inside the terarium. I picked totoro figurine (was torn between totoro or dog figurine but totoro won). Back to my table, I arrange the plants, holland moss and figurine. Then I covered the soil with pebbles as finishing touch. Before I put the cover of my jar, Joy told me to spray the plants and moss about 3 – 4 sprays.

And tadaaa!! I present to you my terrarium creation 😁

Overall it was a very nice experience and surprisingly relaxing. I love making terrarium! The problem is if I have to do it myself at home I need to have the tools and stock up on the equipments. J2 Terrarium also selling a DIY terrarium kit for S$18 at their website though so maybe if one day I want to make another terrarium again, I just buy the DIY kit so I won’t have too many extra. They gave us a paperbag to bring home our terrarium, and that paperbag worth S$2 if we bring it back to purchase something from them.

If you’re looking for thing to do on the weekend in Singapore, you can try this terrarium workshop at J2 Terrarium. For first time customer, you can buy voucher from fave! I think it’s worth the price!

When I’m visiting Singapore, at 1 point I have no idea where to eat for dinner because too many options there and I somehow always ended up in Orchard Road (and get bored from eating at the same place for each visit). Luckily, I have a friend who lives and work in Singapore so she can tell me the place to eat with reasonable price.

We sat down and started browsing at the menu right away. Since my friend has been there before, she already knew what to order. She said their rice ball is delicious, so we ordered that. There are different kinds of rice ball but we chose the one with anchovy. We also ordered Tuna Seaweed Eggroll as side dish.

It didn’t take long for the rice ball to come. It is basically just rice topped with seaweed, fish roe, anchovy, sesame seed. The unique thing is we have to mix it by our self. They gave us a pair plastic gloves. My friend offered me to make the rice ball since she likes doing it. Once she done, we began eating! We both were quite starving lol.

The rice ball is very delicious! I LOVE IT! The taste was perfect and it was not fishy. We finished it in no time! Yum! Their tuna seaweed eggroll also delicious. It was soft and tasty. 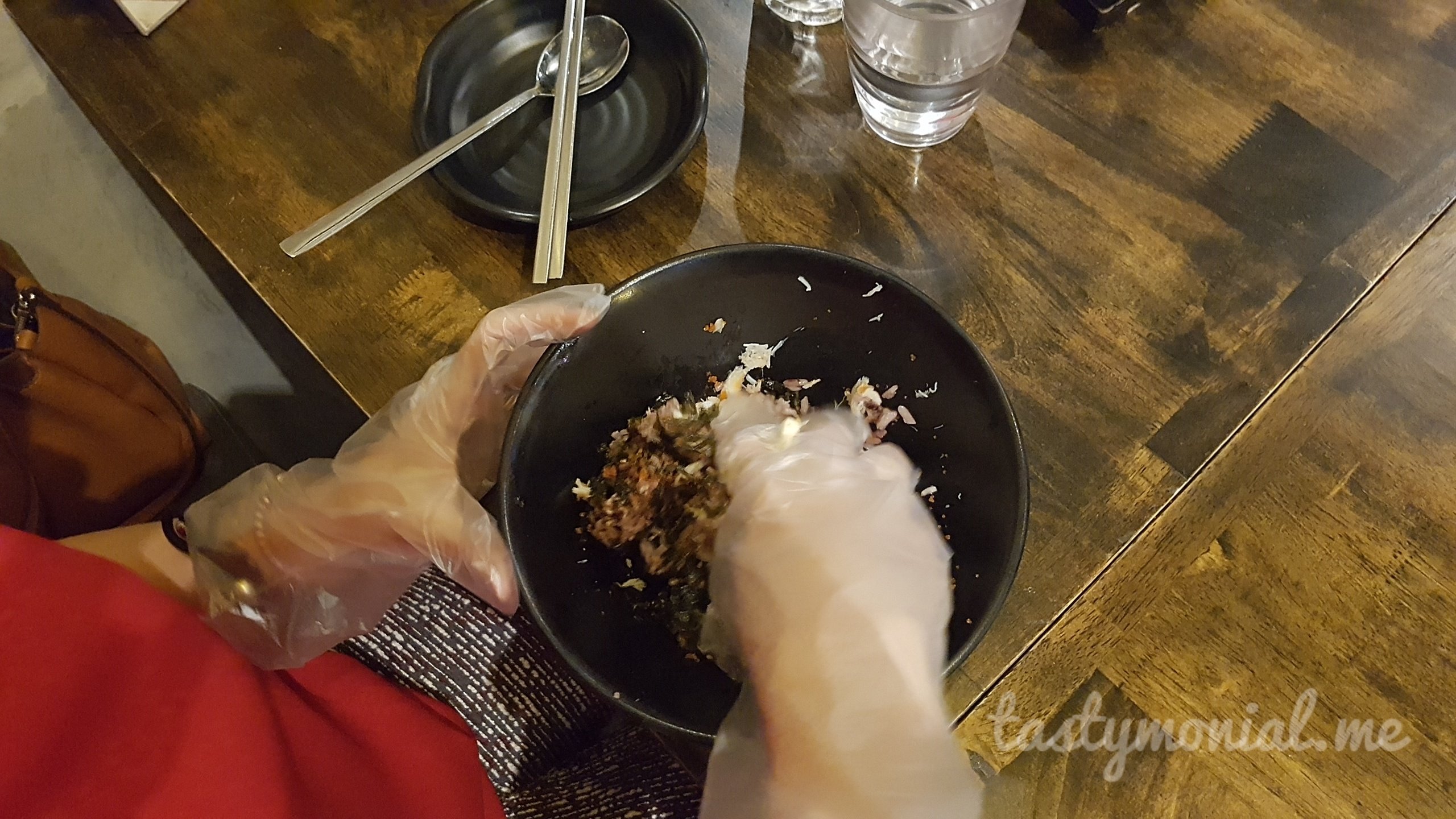 Another friend of mine came as well, so we took that chance to order another portion of rice ball! Plus deep fried spareribs. It looked interesting when it came. We, Indonesian, like fried food. So this spareribs was awesome looking. Unfortunately, it was just the appearance. We put this dish as least favorite among our other order.

So, I recommend this place if you want something unique and yummy. The price also reasonable. Not crazyly expensive for a restaurant in a mall at Orchard Road. I definitely will come back again! Thank you for showing me this place, Pris!